Rael Portillo, the Cuban transformed into a work of art at Art Basel 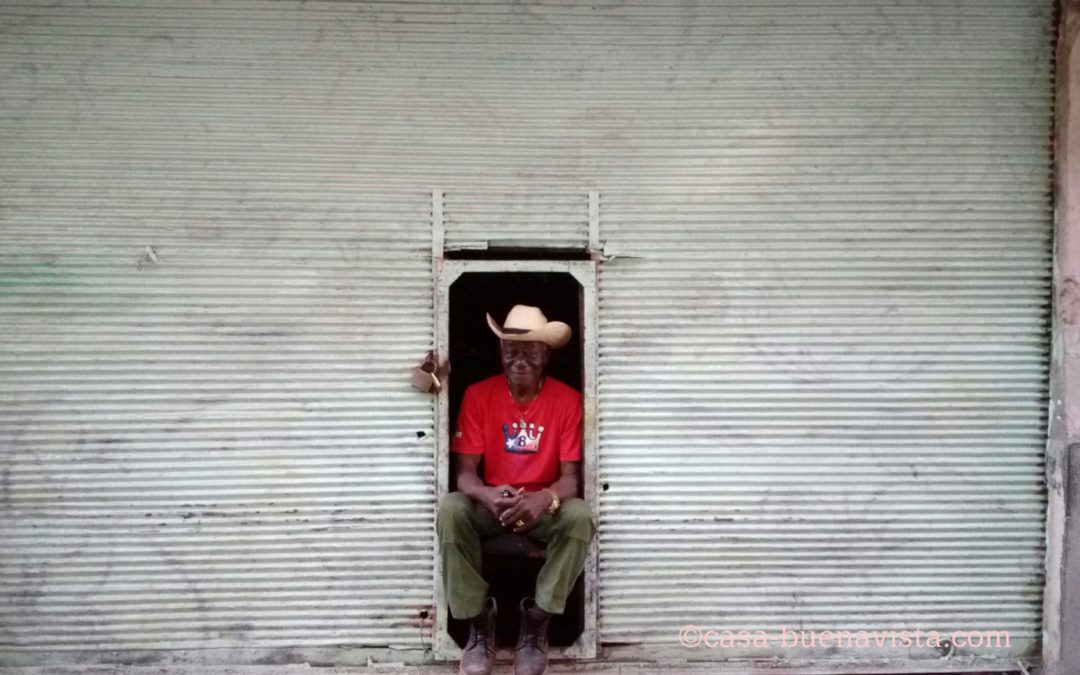 This text deals with a work of art exhibited at Art Basel in 2019 and Rael Portillo Sama, the Cuban who was part of it. My chance meeting with Rael in Havana raised questions about the "zootization" of Old Havana and highly touristic places.

Rael, a living work of art

One day in June 2019, a friend whose wife is an architect tells me that she went to Art Basel and was impacted by a work of art. It was a reproduction of a street scene in Havana; a Cuban sat in the small opening of a large iron door. The visitors stopped in front of the work, commented on it, took a picture of it, without addressing the character, as if it were a piece of furniture, an object that is part of the work. She felt uncomfortable, feeling like she was in a zoo.

Art Basel is one of the largest international contemporary art fairs, bringing together nearly 4,000 artists annually.

When my friend told me about this "performance", I started looking for an article about the subject. I found that indeed, a Kosovar artist, Sislej Xhafa, had mounted this work. As he walked through the streets of Havana one day, where he was present as part of an artistic event, he photographed Rael Portillo Sama, sitting in the opening of the iron curtain of the bodega for which he worked. Some time later, a collaborator of the gallery with which Sislej Xhafa collaborated, returned to speak to Rael and managed to convince him to participate in the Exhibition of Art Basel. It was a question of recreating the atmosphere of this street in Havana, around the door of this bodega, with Rael sitting in the opening, as usual. The artist titled the work "Ovoid Solitud", referring to the egg seller, sitting alone in the opening of his bodega and watching the world pass in the street.

The performance presented at Art Basel pleased some, but displeased others. Indeed, this feeling of being in a human zoo was not well experienced by a part of the public. It must be remembered that in Europe, human zoos, where "wild" or "tribes" were presented in "their natural element", Western onlookers thirsting for exoticism existed for a long time. Over time, these exhibitions have been decried as extremely racist, demeaning and totally contrary to human rights. However, these exhibitions were still present late (in 2005, an African village was opened in the Augsburg Zoo in Germany).

When I found the article about this performance, I learned that Rael Portillo Sama was working in a bodega on Teniente Rey Street and that this is where he had been spotted by the artist. Teniente Rey Street is not far from our casa particular and I often pass by. She is very nice and friendly. Yet I had never noticed Rael in front of his iron door.

My chance encounter with Rael

A few months later, having completely forgotten this story, I had left our particular casa to walk around the neighborhood. I was walking down the street, when suddenly a flash of "already seen" passes through me. I had just passed Rael, sitting in the small opening of his iron curtain. I stopped and turned to him and said, "Hey, but you've been to Art Basel??!. And Rael replied with a broad smile "Yes yes, it's me!". So we started a nice conversation, about his experience, his trip to Switzerland, these future projects. He offered me a coffee and I couldn't help but ask him if I could take a picture of him. Always in a good mood, he gladly accepted. He told me how much he had loved Switzerland, that people had been very kind to him, that it was planned, as part of this work, that he would soon visit Russia and Japan. Nevertheless, he enjoyed continuing to work in his bodega and interacting with passers-by.

Zootisation of the exotic, here and elsewhere

Through this work, the artist Sislej Xhafa wanted to show the feeling of loneliness. For me, this work, which I have not had the opportunity to see at Art Basel, also expresses many other things. During our conversation with Rael, a few tourists walked past us and took pictures of us. Without asking for our consent, without even speaking to us. Every time someone did it, I'd say, "But you know who this man is? You know it's a work of art?" and people's reaction was either to be interested in this story or to leave very quickly without saying a word. The "zootization" of Old Havana. That's how I feel. The "zootisation" of very touristy places, in Cuba or elsewhere in the world. The fact that many tourists behave like a human zoo when they travel. Streets, buildings, and people, are transformed into objects, and are used to satisfy their desire for exoticism. We agree, not all tourists behave like this, but there is a good amount and I feel it in a very negative way.

What are the photos taken for? Isn't it better to know a person, to talk with them, to know their life, their feelings, their aspirations, than not to say a word to them and then to show their image as a trophy? At a minimum, ask her if she is ok to be photographed and under what conditions. Would people who behave in this way agree that strangers should do the same with their parents, their children or themselves? Never do to others what we would not appreciate being done to us.

Finally, this work of art, which I was lucky enough to be able to admire in its original state, made me travel, reflect, imagine, know people. For me, it has a special meaning, certainly different from the meaning that the artist initially gave her. But what makes it a work of art is all the questioning it arouses. Because art isn't that? Art must arouse emotions, negative or positive. And for me, the more a work of art stirs things in us, the more it questions us, the more powerful it is.

In the end, the most important thing is that. This and also the feeling of Rael and his experience. And for his part, he was very happy and is looking forward to being able to travel again, meet new people and be able, in turn, to be a tourist who discovers other exotic landscapes and characters. With the same respect he expects from others.

If you are planning a trip to Havana, please contact us. Our casa particular is ideally located in the Old Havana neighborhood, very close to the Capitol, on which you will enjoy a magnificent view from our balcony! We can also help you in the preparation of your Cuban circuit. And perhaps, you will meet Rael in front of his bodega 🙂