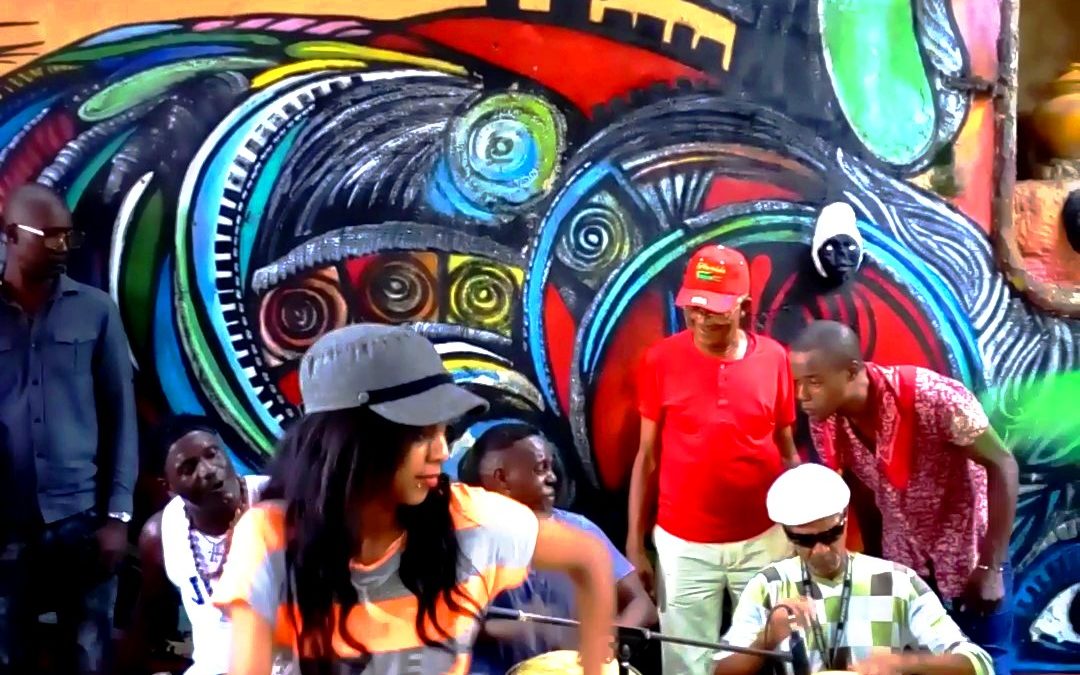 The Callejon de Hamel is located between Aramburu and Hospital streets in the Centro Habana district.

A bit of history

Callejon means small alley in Spanish. The name of callejon de Hamel comes from Fernando Belleau Hamel, a North American of Franco-German origin who bought land in the Cayo Hueso district in the early 20th century. He went up a trade in raw materials and foundry and set up to work afro-descendants there and Chinese. To house them, he builds them houses, a generous act at that time and that did not go unnoticed. Thus, a few years later, his name was given to the small alley. In 1913, the government neocolonial wanted to buy back the land, but without success.

It was not until 1990 that the small alley takes on the appearance it has today, this under the impetus of the painter, sculptor and muralist Salvador Gonzalez Escalona. He painted the first mural dedicated to Afro-Cuban culture. The artist’s goal was to bring creative art to the people by giving life to an alley forgotten by the time and by the city, and also setting up an art gallery. This project is a unique creation, in the country and around the world, and which will be always open to all sections of the population. It’s from 1993 that are taking place systematic activities of all types and for people of all ages with the aim of enriching the culture of the Cuban population and all the people who visit this place.

The Callejon de Hamel is a place tribute to Afro-Cuban culture. It is a creative space, where one can admire raw art, objects that can be made with leftovers from old bicycles or abandoned toilet bowls, which come back to life with new colours. In addition, there is a “Nganga”, sacred place for the celebration of the religious rites of “Palo Monte.” The Callejon is also filled with colorful murals and represent the religious and cultural syncretism of the island. The drawings represent gods and orishas (spirits), spiritual and animals symbols and inscriptions of poems and legends about life, love and dignity. In the callejon, there are also products associated with Afro-Cuban works and rituals, such as a stand of roots and medicinal herbs. The Callejon de Hamel is a space where art and community interact and where there are festivals in which the inhabitants of the area participate.

What can be done and seen at Callejon Hamel?

The Callejon can be visited all days of the week. There is often music and you can admire the sculptures and murals. There is also a small museum-gallery that is possible to visit for free. In the alley, you will find some bars that also serve food. You just have to know that the prices are a bit higher than elsewhere, due to the fact that the place is visited by many tourists. You can also see a small stand of roots and plants and speak with the seller who will gladly explain you the the virtues of each product. Every Sunday from noon, the alley explodes with music, dance, world and colors, until around 4pm.

Personal impressions; one doesn’t see what’s before his eyes!

In 2015, I lived for almost a year a few blocks from Callejon de Hamel. I was going to the food market across the street. I was always looking at this alley from afar, but I never entered there. Since I moved to Old Havana and welcomed customers in our casa particular, I’m often asked if it’s worth to go to Callejon de Hamel, especially on Sunday afternoons. These questions started to tickle me and one day I took clients to the Callejon on a Sunday afternoon, telling them, “Let’s go, we’ll see!” When we arrived at the place, we found a lot of people and a lot of tourists. Personally I’m not a big fan of this kind of atmosphere, but one should always be open to having a good surprise! We approached the corner where the music came from and where everyone was crammed and there the show was really worth it! Musicians and rumba singers and dancers were doing the show. I’ve always been very interested in Afro-Cuban culture and if we ignore the horde of tourists who frequent the place, it is undoubtedly one of the only places in Havana, and perhaps even throughout the island, where it is possible to regularly observe Afro-Cuban dances and songs, without artifice. There are local people, santero-as, artists and medicinal plants sellers. It is a happy festive mix, finally very pleasant. As all over, cuban people are open to discussion and party. It would be really a pity not to get there if you’re on a Sunday afternoon in Havana!

How to get to callejon Hamel from our casa particular

There are several options to go to Callejon de Hamel from our casa:

Don’t hesitate to ask us for informations to go there when you are in our particular casa.